Earlier this year I underwent a major life transition. After over four years living in Southeast Asia while supporting DAI’s ASEAN-U.S. PROGRESS project, I packed up my Jakarta apartment, shipped my belongings, and said farewell to the people and place that had become my home. The year 2019 was certain to be one of adjustment and inescapable reverse culture shock as I transitioned to life in America and a new position at DAI’s Bethesda, Maryland, office.

Upon return to the Washington, D.C., area, many of my initial joys and longings were what one might expect. I relaxed into a renewed sense of confidence walking along sidewalks and crossing intersections; my biggest risk awkwardly bumping into other pedestrians as I gravitated to the wrong side of walkways. I relished my ease of access to American enterprises such as Netflix, Target, and Trader Joe’s. And of course, I delighted in being 10,000 miles and 12 time-zone-hours closer to my U.S.-based family, friends, and previously long-distance boyfriend.

At the same time, I missed my Jakarta community: friends willing to hop on a plane for a last-minute island getaway; wonderful colleagues who had become like a family; an amazing yoga teacher whose class I attended every possible Saturday. Oh, and let’s not forget my favorite spa serving up 90 minutes of reflexi (foot reflexology combined with a body massage) for the equivalent of $12.

What may be more surprising—given my transition from emerging middle-income country to global superpower—is a void that lingers to this day: missing my Go-Jek app. If you’re not familiar, Go-Jek launched as a motorbike ride-hailing app, digitizing and disrupting Indonesia’s previously informal and territorial ojek (motorbike taxi) system. From 2015 to 2018, I witnessed and enjoyed Go-Jek’s steady expansion of services linking users not only to ojeks, but also to cars (quickly surpassing Uber and rivaling competitor Grab), then rolling out features for food delivery, grocery shopping, moving, and courier services. That was just the beginning. In a megalopolis known for making lists like “cities with the worst traffic in the world” (receiving the crown title by TIME in 2015), an app that provided services from fingertip to doorstep was truly groundbreaking. The surge in usage of apps like Go-Jek and Grab is even credited by some as a factor in Indonesia’s recent dethroning of the “worst traffic” title.

Today, it’s hard to keep up with the number of services available via this SuperApp (a term used to describe “all-in-one” apps, like Go-Jek, that offer a myriad of different services in a single platform). They currently include same-day online shopping delivery, auto and home repair, event ticketing, medication, spa and salon services, house cleaning, laundry-washing, airtime top-up, and frankly, almost anything you can imagine (or at least that’s that I keep thinking, until without fail, yet another new feature—such as in-car shopping— appears). 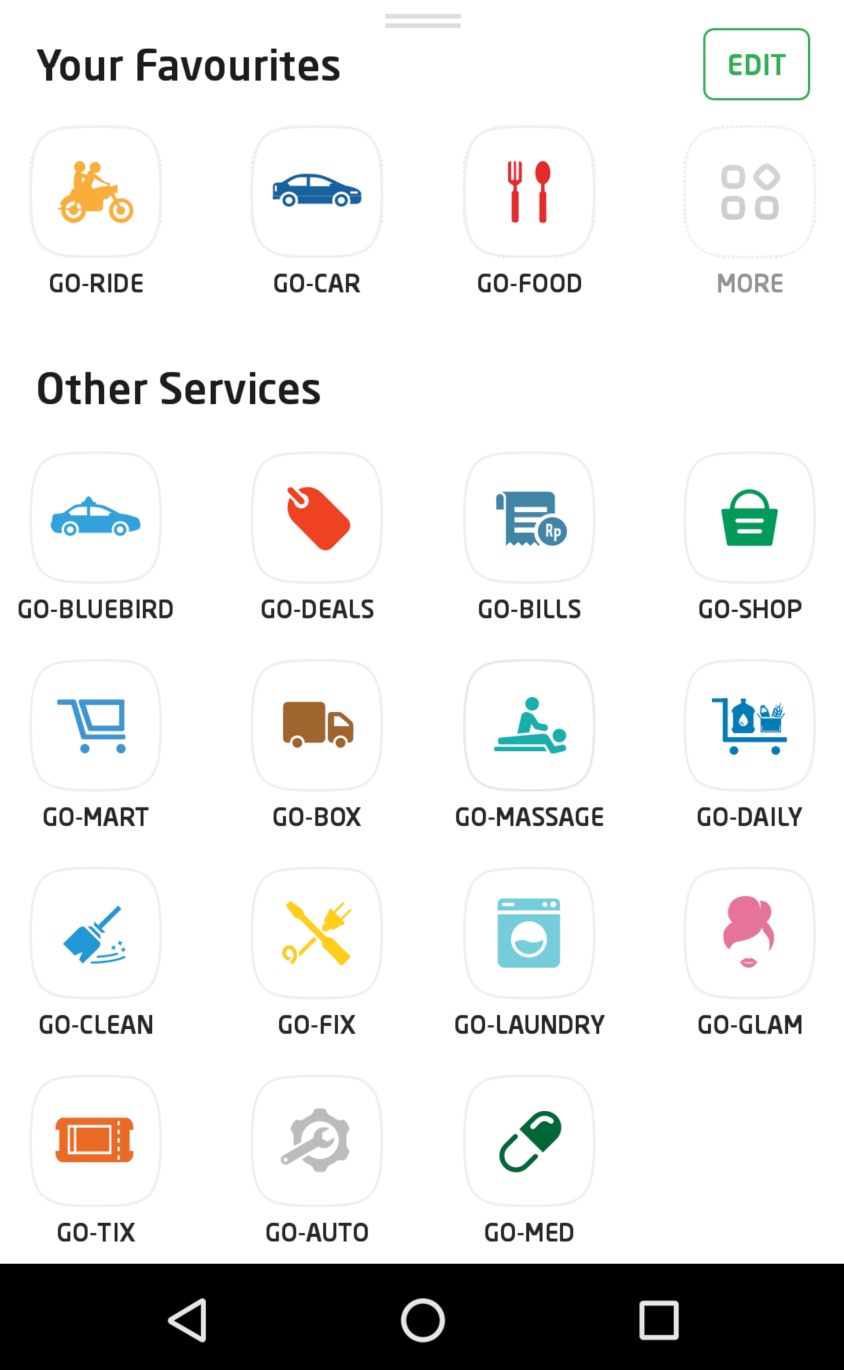 Screenshot of the Go-Jek app’s service offerings, May 2019.

Go-Jeks’s services have more recently expanded into digital financial services, offering a mobile wallet for cashless transactions not only for app-ordered services, at restaurants and between friends but also for bill payments, charitable donations, and insurance and savings accounts for drivers (and soon, if not already, for consumers). Additionally, Go-Jek drivers essentially serve as mobile money agents for users to cash-in, resulting in a platform with the potential to expand fintech beyond urban areas to last-mile communities in emerging markets. The possibilities seem endless.

So where are the American SuperApps? Sure, new apps enter the digital market every day in the United States, but there is nothing so comprehensive, packaged into a single platform and as widely available as what is available in Southeast Asia. (UberEATS didn’t even service the Virginia neighborhood where I first resided upon my return. Come on). Some are predicting that Google Maps is well on its way to achieving Super-status. But until then, I’ll continue pining for Jakarta’s SuperApp. That, and of course those super affordable reflexi massages.

For more on the tech scene in Indonesia, check out my colleague Adam’s two blogs on digital insights (here and here) and another on chatbot development (here).