Regular readers of [email protected] will know that we’ve been supporting Kosmos Energy’s Innovation Center (KIC) in Ghana for the last two years. KIC’s work with young tech entrepreneurs in the agricultural sector has garnered awards and plenty of media attention, and Kosmos is now looking to apply what it has learned to a new country: Mauritania.

Kosmos has had good experiences doing business there and is now taking a rigorous approach to its social investments into entrepreneurship there. So I recently joined the Kosmos team on a research trip to the capital city of Nouakchott to meet with local startup incubators and entrepreneurs and find out more about their successes and the challenges the sector faces today. What did we learn? 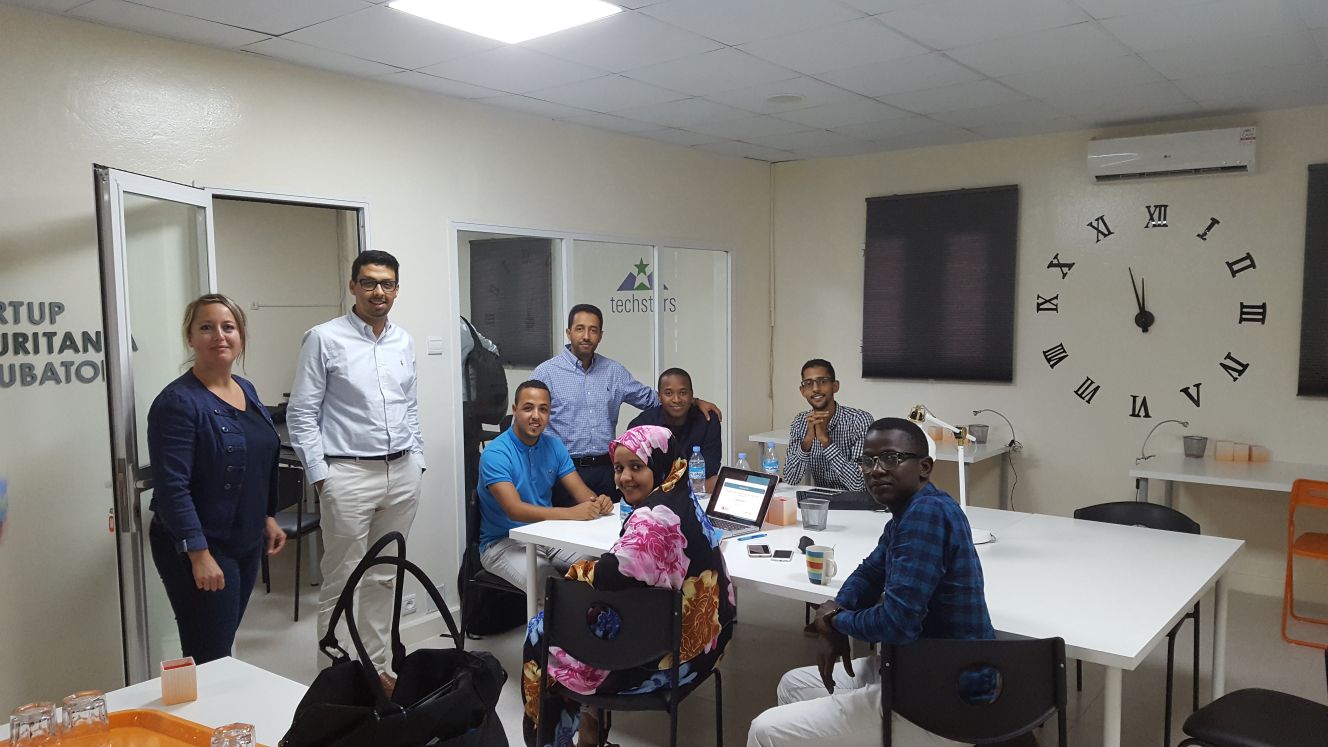 Young entrepreneurs and staff at Startup Mauritania in Nouakchott, Mauritania.

Youth-led Entrepreneurship is a Must in Mauritania

First off, both the Mauritanian government and the donor community see youth employment as a priority for the country. A 2016 estimate puts the country’s median age at 20.3 years (similar to Ghana’s 20.4). Youth between the ages of 15 and 25 comprise 20 percent of the population and are experiencing an unemployment rate of around 19 percent. Youth are seen as key drivers of social change in the country, but a lack of economic opportunities—partially due to population growth and urbanization—has also made them a vulnerable demographic. Tackling youth issues is also of geostrategic importance for Mauritania and its government given the relevance of this demographic to stability and inclusive socio-economic development.

By all accounts, Mauritanian youth do not lack for entrepreneurial instincts. The traditionally trade-driven economy has led young entrepreneurs to seek opportunities to build more modern ‘value-added’ businesses. This goes for both professionally educated youth (many of whom are educated outside Mauritania) as well as those with vocational training. Our research team met with young entrepreneurs with both new innovations as well as local adaptations of business models that have been developed elsewhere.

Nouakchott has a small but active group of incubators, and the research team met with four of them: Startup Mauritania, Hadina RIMTIC, i-Lab Mauritania and Nouakchott Business Center. Most of these incubators were created in the last five years, and as you might expect, all of them provide youth-led startups with a mixture of training and capacity building to startups, working spaces, internet access, and—of course—caffeine. Some of them also supplement their income by offering consulting services to international donors. They also host coding challenges; Startup Mauritania hosts Startup Weekend once a year, and Hadina RIMTIC also hosted a mobile app development competition known as the Mauriapp challenge. It was clear, however, that compared to Ghana, Mauritania’s startup and incubator ecosystem is ready for the next stage in its development.

Challenge 1: From Idea to Reality

With few exceptions, the young Mauritanian entrepreneurs we met have come up with a conceptual foundation for new businesses, but they soon run into trouble moving beyond the idea stage which requires building prototypes, creating viable business models, marketing their products, segmenting their customer groups, etc. In other startup ecosystems, the function of guiding startups beyond initial concepts towards mature businesses is played by a variety of actors—educational and research institutions, commercial associations, and startup incubators. Building such integrated networks that link young entrepreneurs’ ideas and energy with knowledge, technical expertise, funding and “big brother” mentoring is critical to success.

In Mauritania, however, there is a critical gap in this regard. Incubators need to offer improved technical support on business process, sustainability, and management. Most incubators are funded by young Mauritanians who have a sense of social and civic obligation to promote youth-led enterprises. However, since few of the startups generate revenue, they aren’t yet able to pay for the services that incubators offer. Incubators are currently refining their internal business models to be able to support entrepreneurs in an sustainable way.

The second structural challenge that limits the growth of the local startup ecosystem is the lack of access to finance, especially from the local banking sector. Mauritania has a large banking sector (relative to its population), with 22 banks that operate nationally. However, most of these banks lend money in a traditional banking fashion that does not meet the needs of the startup sector.

First, banks provide relatively large loans, typically above USD$25,000. Most microfinance institutions targeting small poverty-reduction products provide loans less than USD$10,000. Startups usually fall within this ‘missing middle,’ and there are no financial products available in the market to meet their needs. Second, banks demand traditional collateral—land titles, security deposits, a minimum of five years of credit history, etc.—which the typical local startup cannot provide. Third, given very low banking rate (less than 10 percent of the population is banked), banks don’t have access to long-term resources and require fast repayment terms (the average is less than two years). Local startups cannot sustain this kind of repayment schedule. Finally, banks are accustomed to working with relatively large established players in traditional sectors such as import/export. They do not possess the expertise or the staff capacity to monitor the health of loans they might provide to new startups.

Despite these two important structural limitations, there are important opportunities that Mauritania’s startup ecosystem can tap into. While many technically skilled youth would prefer to work in ‘stable’ government or private sector jobs, a number of young people from various walks of life—including a significant percentage of women—consider entrepreneurship to be a viable way for them to reach their goals and build financially independent lives. Government regulations also make it relatively easy to start new businesses. Strong family ties and networks create a kind of safety net that young businesses can use. Finally, there is a general feeling among entrepreneurs that Mauritania has immense economic opportunities that are yet to be tapped, especially in the services sector, local content that supplies extractives, livestock, agriculture, and fisheries.

Stay tuned for more updates on how we help young entrepreneurs in Mauritania seize these opportunities in 2018!