Kate Heuisler recently spoke with Voneat Pen, the Chapter Ambassador for Technovation in Cambodia, about her work growing the successful all-girl tech entrepreneurship education program for the seventh year in a row. While juggling her roles as the co-founder of the tech startup 606, a programmer, and STEM advocate, Voneat has been instrumental to Technovation’s success during its most challenging years. When COVID-19 pushed the program online overnight, the Technovation community (and its partners) were still able to successfully engage new all-girl teams, mentors, schools, and provinces across the country. To date, Technovation has helped connect more than 2,000 Cambodian girls to essential 21st-century tech creator skills.

This is an excerpt from that interview.

KATE: Tell our audience about Technovation from your perspective. What does the program do—and how did it get started in Cambodia?

“Women in tech” is not a common set of words seen altogether. This is a big issue in Cambodia, especially in the computer and STEM fields. The program started in Cambodia because of the need—the gap—in pre-university tech education, especially for girls. In 2014, I was in my last year in college, and I didn’t know anything about some parts of the sector. I had never even heard the word entrepreneur. 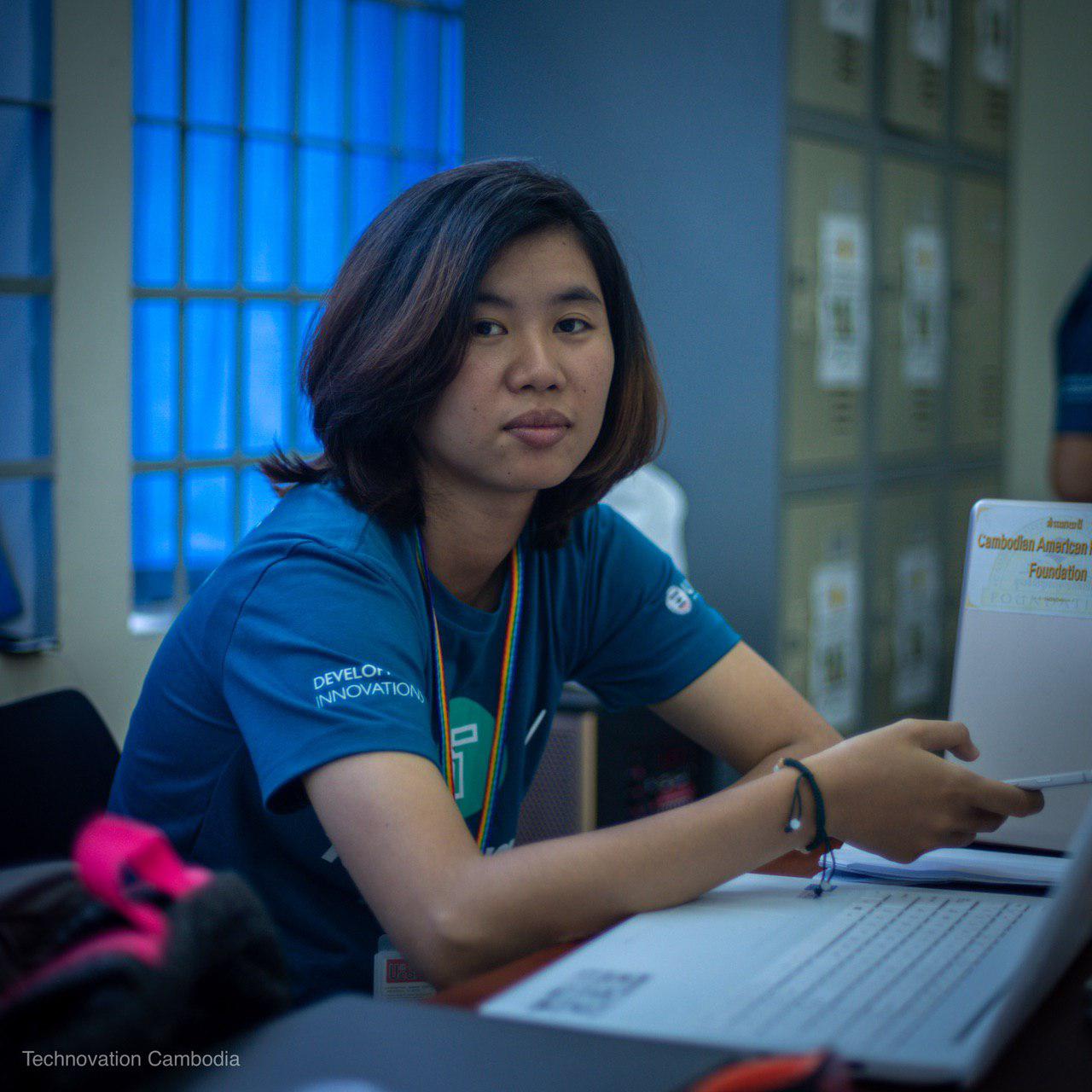 KATE: This year was the seventh Technovation season in Cambodia. How did it go?

VONEAT: This year was harder than last year. In 2020, we went to the provinces and recruited mentors and mentees before COVID-19 hit. This pre-program was helpful, even critical. In 2021, we had trouble attracting funding because our last donor changed its funding process. We realized in November that we had to move forward without funding. Then, the second wave of COVID-19 hit before we could get out to promote the program. I could only get to one province, Battambang, to talk to existing partners (Technovation Clubs that coordinate programs in their villages/towns). We knew we needed to coordinate with groups like them and build a team in Battambang so they could coordinate with each other. Unfortunately, there was little momentum without the pre-program! We had to do it all virtually.

KATE: That is not easy. How many teams completed the program this year?

VONEAT: Around the world, 1,700 teams submitted application packages from more than 60 countries! In Cambodia, we started with 39 teams this year—the lack of pre-programming and promotion really affected us. In 2021, it was hard to connect girls to one another because of the internet, and the lack of personal connections. Mentors didn’t know how to break the ice virtually, and this was challenging. Sometimes I joined the groups online to help facilitate, but it didn’t work with everyone. Fast forward, I was monitoring the Technovation dashboard two weeks before the competition, and I was freaked out! The number of submissions wasn’t high yet. I knew from the discussions on the Telegram channel that there were a lot of teams working on this, but they just hadn’t submitted anything yet. In the end, a total of 25 teams from Cambodia submitted their pitch videos and prototype apps to the global competition.

We saw so many strong pitches. One powerful team focused on attacking depression among teenagers, another team tried to tackle environmental problems in their communities, and one team developed a solution to help people share used books so more people can read them. 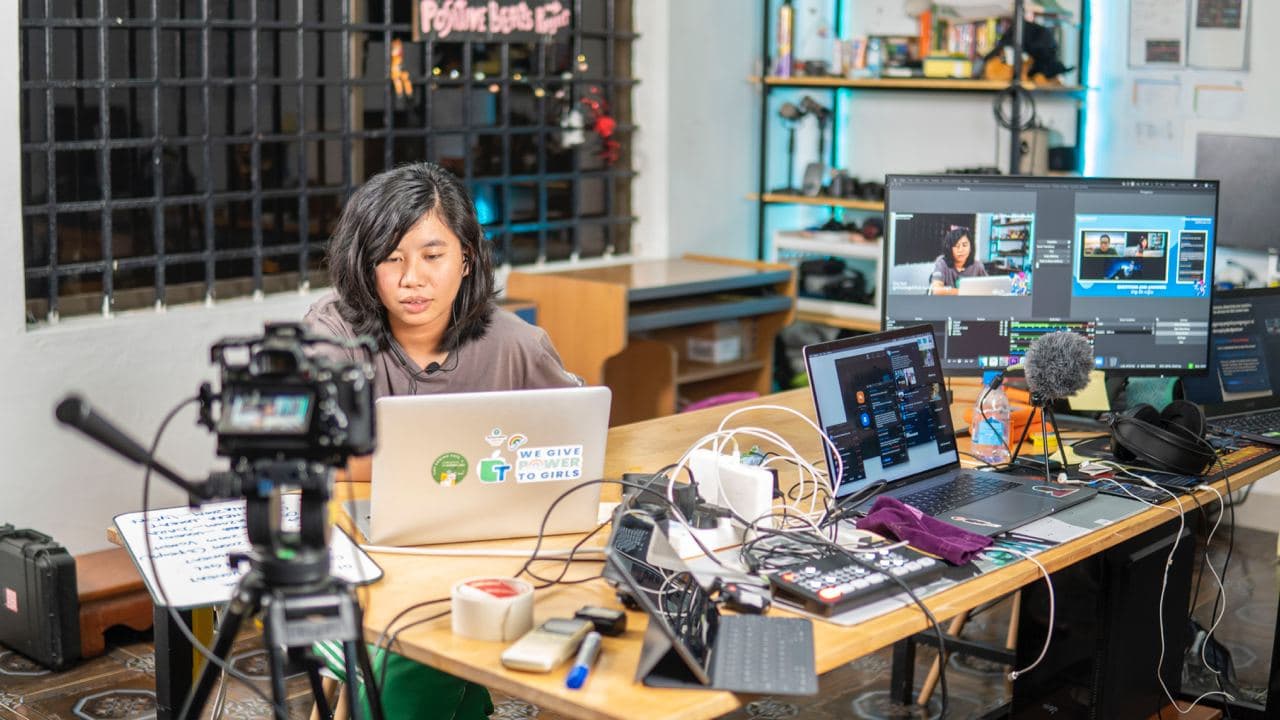 The Technovation community worked with the Ministry of Education, the Ministry of Economy and Finance, sponsor Khmer Enterprise, and teams across the country to run a successful national pitch event.

KATE: I know it is incredibly complex and challenging to run something with so many moving parts and partners. It sounds like it was also hard to keep people motivated virtually. Tell us your secrets.

VONEAT: Video is part of our secret. We use it at critical moments in the season to deliver messages to the girls. For example, we film alumnae from previous years talking about how frustrated they were right at the end of the four-month program. We release this video to pull the stories together—highlighting both teams that won and that didn’t win. This motivates teams to push to the finish line.

The other secret is availability. During the submission week, I always make myself available to the teams for technical questions and making compromises with their designs. A lot of teams give up right at the end. I always give teams this advice—show your work! Whatever you have, put it out there! Finish the project and show people what you did even if it isn’t perfect.

This year we (and Technovation Global) also shifted to accepting dual-language applications. This was especially important for the national pitch because not everyone felt comfortable pitching in English or answering questions from the judges in English. This helped the program be more accessible for teams from the provinces, especially.

KATE: So many practical lessons here! Anything else you learned while coordinating this complex education program?

VONEAT: No matter how big or small something is—it requires 101 percent effort. To sustain Technovation in the future, and we are working on that, we need to help more students have tools to self-learn, and empower local champions and clubs in the provinces to have the tools to be able to support new teams.

KATE: What is next for Technovation in 2022 and beyond?

VONEAT: In 2022 I plan to do a lot of things! COVID-19 hit us hard. Last year, we wanted to have a nationwide festival to showcase the alumnae teams from the past. I hope we can still do this. We also want to work with mentors and create more videos—especially for lessons on coding. As a computer science student myself, I know how important it is to have videos that explain the detailed process for students so they can follow through all the way.

KATE: What advice do you have for others around the world who want to help more girls get access to tech entrepreneurship and tech creator skills?

VONEAT: The Technovation platform is open for you! You can build and connect yourself into the program to create your own club or chapter. Before you launch, though, join a team in your region or your country, and volunteer as a mentor to see how it works. Now, it is getting even easier with Technovation’s global platform, you can connect globally and build cross-country clubs.