This blog is part of the WomenConnect Challenge (WCC) Blog Series: Introducing Strategies for Closing the Gender Digital Divide. The U.S. Agency for International Development (USAID) WomenConnect Challenge is a global call for solutions to improve women’s participation in everyday life by meaningfully changing the ways women access and use technology. In the first round of the Challenge, WCC awarded nine grants to organizations working to identify and change the social and economic circumstances that keep women offline and under-empowered. Through close partnership with local awardee teams and community members, WCC has identified five proven strategies for closing the gender digital divide and increasing women’s empowerment. This blog explores one strategy at length.

In Bihar, India, Mahadalit women are regarded as the poorest, lowest caste and are often isolated due to cultural barriers, social norms, and rural location. Mahadalit women are also at high risk of becoming victims of rape or sexual harassment, often perpetrated by members of upper castes. The looming threat of violence, caste discrimination, and subsequent deprivation of social benefits and entitlements often silence and silo women, hindering their ability to self-advocate or come together to work for change.

Troubled by these injustices, Gram Vaani—the creator of Mobile Vaani, a social media platform specifically designed and adapted for use in rural communities—applied for a grant through the USAID WomenConnect Challenge (WCC), which works to change the social and economic circumstances that keep women offline and under-empowered. With the help of this USAID funding, Gram Vaani developed a new, free, voice-based media platform called Meri Awaaz Meri Pehchan (MAMP, translated as “My Voice My Identity”) to help create a safe space for women’s interaction and education.

The MAMP platform featured content specifically designed for women, including news, community information, inspirational stories, and a 38-episode drama series based on a fictitious character named Munni, a local girl facing social, cultural, and economic pressures with which other women might relate. The platform also incorporated a verbal chat room for women, introducing the desired safe space for information exchange and resource pooling. Women posted comments, questions, or updates on local news and information, encouraging them to voice their opinions and concerns and drive conversations. 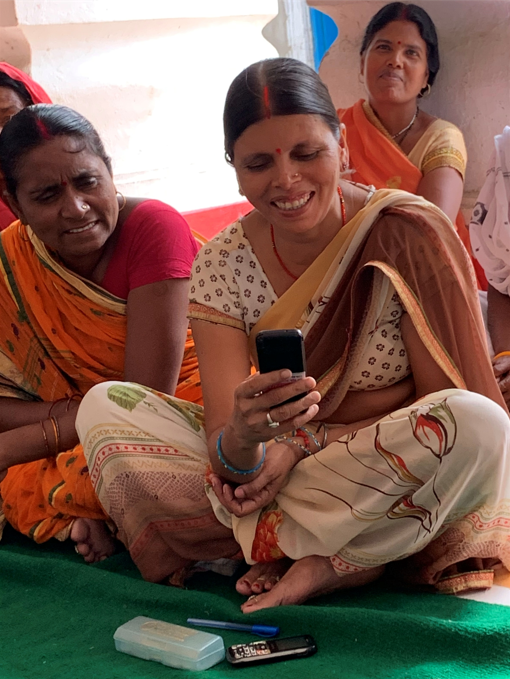 GramVaani developed a mobile phone-based platform that allows women to learn from their peers and discuss collective solutions to their most pressing challenges. Photo: Gram Vaani.

“In a sense, the WomenConnect Challenge happened at a very interesting time,” added Ritesh Datta, former Gram Vaani Director for Programs and Partnerships. “Gram Vaani, at that point, traditionally had a strong presence in the communities… And we were already looking for strategies, plans, and of course funding to engage more women.” Serendipitously, USAID selected Gram Vaani as one of its WCC first-round awardees.

For the communities where Gram Vaani implemented its WCC programming, the barriers to women’s use of technology—and thus the Mobile Vaani platform—were primarily socio-cultural. “It’s not that women do not have access to basic feature phones. They have access,” Chatterjee clarified. “Almost every household, even in the remotest, rural [part of] Bihar, has at least one basic feature phone. But that basic feature phone generally lies with the men of the household… And there’s a huge taboo around women using mobile phones independently. Because that supposedly sheds a light on their ‘bad character.’”

Revi Sterling, Director of the WomenConnect Challenge, reflected on this prevalent taboo around women’s access to new technologies during the “WomenConnect Challenge Steps to Success” webinar series. “As we know, empowered women are terrifying to the status quo,” she stated. “We can select Band-Aids to repair the gender digital divide, and we have forever. ‘Here’s a computer training course, subsidized phones, subsidized airtime…’ none of those things are sustainable,” Sterling elaborated. “What the WomenConnect Challenge is really about is understanding exactly the cultural context of the communities that we are trying to engage in and then creating appropriate, sustainable, and gender-equitable solutions that have full community support.” Gram Vaani, uniquely situated to understand nuanced social and cultural contexts in the Bihar region, agreed that the most sustainable solutions to the gender digital divide need to be incubated in the communities themselves.

“We conducted something we call ‘a content needs assessment’ to understand the local context,” Chatterjee said. “[The] topics, issues, came up from the community. After that, we packaged several studio-generated content modules to excite, stir, encourage the women to share their own opinions.”

When given a platform of communication such as MAMP, many women choose to champion issues disproportionately affecting women, such as gender-based violence and access to finance or government programs. When such advocates band together as a group, the impact of their efforts expands substantially.

Many community grievances shared on the platform were then addressed by local officials, further encouraging the women’s civic engagement. “That was the goal,” said Chatterjee. “To engage them through these platforms so that they can then be empowered… to go to the relevant stakeholders, demand their rights, and participate in the political processes.”

In India, village communities routinely hold a meeting called a “Gram Sabha” to discuss local governance and development issues and negotiate need-based plans for the village. Participation of women in Gram Sabhas was traditionally very low in Bihar, as the meetings were widely considered a man’s duty to attend. “Women who are not elected representatives, they do not go into these kinds of discussions and meetings and forums,” shared Chatterjee. “So, we encouraged a lot of women to participate in a Gram Sabha meeting [for the first time], and many of them actually raised issues pertaining to the development of their own areas.”

In some cases, Mobile Vaani helped empower women not just politically but also interpersonally. “My life has changed because of Mobile Vaani,” shared one user, “Since the time of my marriage I have been emotionally abused by my in-laws. I never felt like raising a voice against that and kept quiet. The programs on MAMP showed me a new way. I shared my pain with one of the Mobile Vaani didis, and she requested me to voice my concerns to my husband. [She also] spoke to my in-laws and explained why their behavior is improper. A lot has changed since then. My inlaws started behaving nicely with me.”

Gram Vaani reported not only helping empower individual women but also witnessing a ripple effect. “I recall a story of a specific girl,” said Chatterjee, “A girl who herself escaped child marriage through the help of our intervention when she called up the child protection number that we publicized… Her marriage was stopped, and, in turn, she actually helped stop several other child marriages… She herself has stopped around eight to ten child marriages happening in her own family and her own village.”

The partnership between Gram Vaani and USAID under the WCC provided thousands of women access to an engaging community media platform, which proved to sustainably catalyze opportunities for empowerment and collective action across the community. Sterling said: “Gram Vaani helped isolated, rural women feel empowered to voice their opinions and create meaningful interactions, giving them the confidence to become advocates for their community, for their families, and for themselves.”

The WomenConnect Challenge is implemented by DAI’s Digital Frontiers project, a buy-in mechanism that works closely with USAID Missions and Bureaus, the private sector, and international and local development organizations to identify successful and sustainable digital development approaches and scale their impact globally.