This blog is part of the WomenConnect Challenge (WCC) Blog Series: Introducing Strategies for Closing the Gender Digital Divide. The U.S. Agency for International Development (USAID) WomenConnect Challenge (WCC) is a global call for solutions to improve women’s participation in everyday life by meaningfully changing the ways women access and use technology. In the first round, WCC awarded nine grants to organizations working to identify and change the social and economic circumstances that keep women offline and under-empowered. Through close partnership with local awardee teams and community members, WCC has identified five proven strategies for closing the gender digital divide and increasing women’s empowerment. This blog explores one strategy at length.

“It can lead to stealing. Or promiscuous activities, drug abuse, rudeness, stubbornness, lies… 90 percent of the causes of immorality, bad behavior, attitudes of urban women are related to the internet.” This was one man’s justification for restricting his female family members from using the internet and mobile phones. “The internet will destroy their good upbringing and morality,” declared another young man. “We feel that the phone is a simple way to destroy a woman’s morality and alter her thoughts,” agreed yet another.

When WCC grantee Equal Access International (EAI) began its #Tech4Families program in northern Nigeria, baseline interviews were rife with this idea that women’s use of the internet and digital technologies would lead to their moral decline. At the baseline, 80 percent of men and boys interviewed did not believe the internet could be beneficial for women and girls, citing women’s use of digital technologies as immoral, inappropriate, or unnecessary. Many female interviewees echoed the sentiments of their male counterparts, perhaps having internalized the negative gender norms or fearing community backlash.

The #Tech4Families program set out to explore and pilot innovative approaches to combating these dominant and harmful perceptions at the root of the gender digital divide, recognizing that an inclusive digital ecosystem requires that women not only have access to technology and the internet but also feel safe, empowered, and informed enough to use these tools. EAI’s programming invited the participation of the whole family—including fathers, who are often the de facto decision-makers of the household—to help favorably shift attitudes about technology and gender norms, highlighting the use of the internet for education and entrepreneurship opportunities.

EAI’s curriculum also emphasizes online safety, including recognizing and preventing gender-based violence online. “It is also essential that we stand up against online violence and intimidation of women and girls, and teach our sons to do the same, so that everyone can feel safe and respected in online spaces,” states the #Tech4Families curriculum. “Often parents feel that banning their children is the safest way to protect them from the internet and mobile technology, but as it is such an integral part of our lives, it is better to educate our children and ourselves about how to navigate the potential risks and stay safe online while enjoying all the benefits,” the curriculum asserts.

EAI’s approaches proved so successful that, in endline interviews, 95 percent of male interviewees said they now believe the internet to be beneficial or very beneficial for women and girls in their families and communities. At the baseline, 40 percent of women said that the fear of community backlash stopped them from using the internet and technology; this reduced to a remarkable 0 percent in the endline.

“I initially thought women were weak compared to men when it comes to many things,” reflected Sadiya, a mother participating in an EAI group discussion. “But I don’t have that perception anymore… After some sessions, when we go back home with my children, we used to say things like ‘How can a woman benefit from the use of internet? I think it will only lead to her downfall’…. We eventually got to understand that that way of thinking is a setback. So, my perception has changed as a result of participating in this program. In fact, I can now allow my daughter to go to the internet café.”

What made Sadiya change her mind? EAI achieved this shift in perception by adopting a multipronged approach to influencing social and cultural norms and behaviors. The USAID grantee produced and released a 12-part radio drama designed to challenge oppressive gender norms, promote access to technology, build skills, and destigmatize and normalize women and girls’ use of digital technology. Working with local leaders and scriptwriters, the organization designed characters and plotlines with which the target audience could directly relate. “Each of the central characters went through an arc of change that brought with it an increased understanding of the value of women and girls’ use of technology and a focus on how to encourage this understanding in others,” EAI reported.

In addition to listening to the radio program, which reached an audience of nearly 9 million, select families also participated in facilitated sessions over an eight-month period in which they were called to reflect on the issues raised and were invited to communicate as a family in a safe, mediated environment. The radio program and accompanying curriculum sessions also emphasized how Islam promotes learning and how the internet and technology can help enable education, religious and otherwise. Instead of positioning digital technologies as oppositional to religious beliefs, EAI practitioners built intentional relationships with religious leaders and local role models, allowing message delivery to come from trusted sources, lending credibility, and a sense of familiarity. 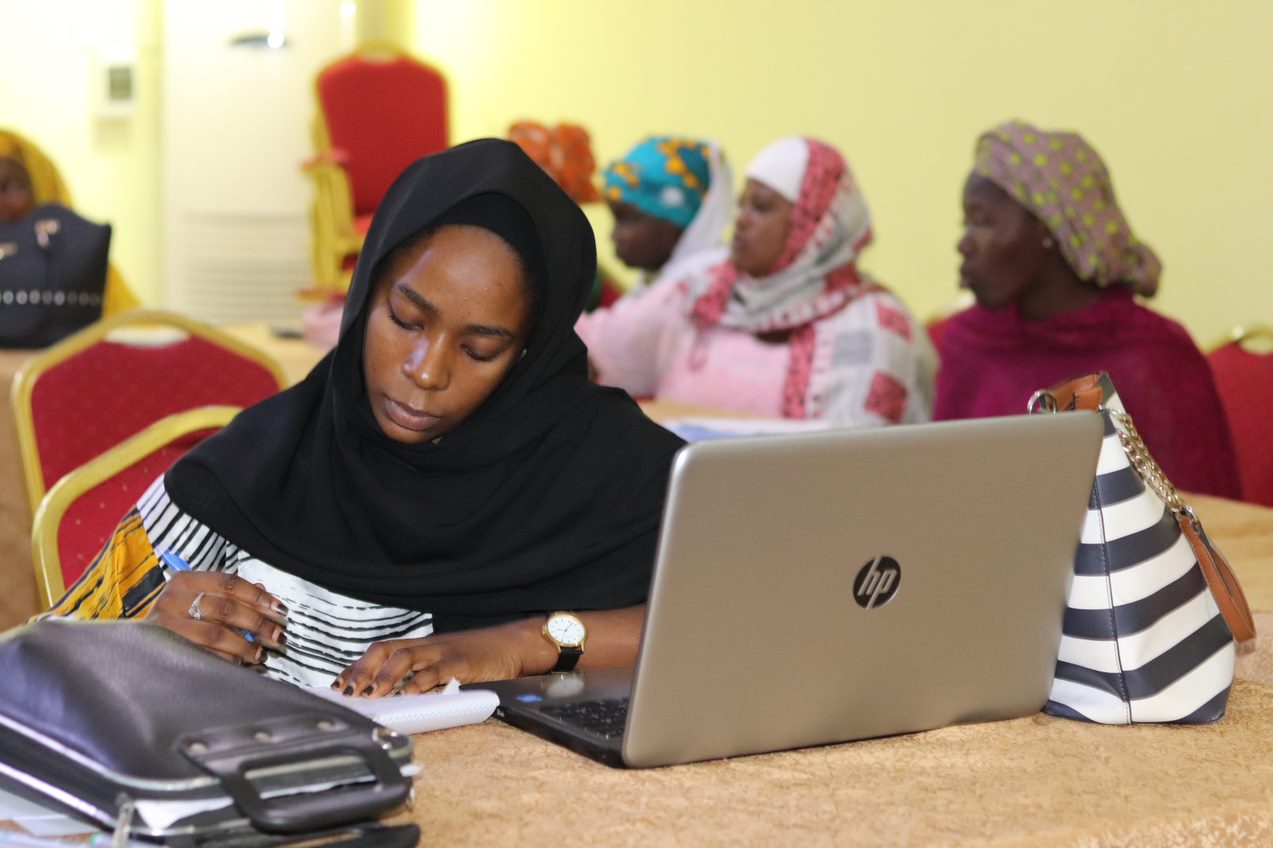 “Initially, just like most of us here, I used to think religious clerics have played a role in discouraging use of internet and technology in our societies,” shared Auwalu Saleh, a father participating in the EAI facilitated sessions. “This program gave me the opportunity of contacting imams and discussing the issues with them as part of our take-home assignments. To my surprise, these conversations I had… have changed my initial perception completely, because I found out that not all the imams are against the internet. I was given [an] example by one imam that the use of internet is like using the Quran; you can either use it for a good cause or do evil with it… So, if such religious leaders can promote such awareness… I’m sure there will be positive change.”

Participants also reported improved familial relationships as a result of WCC programming. “Initially it was even hard for my children to look at their father while they [were] talking to him, but it is different now,” reflected mother Habiba Abubakar Ahmad. “I have full confidence that if my children face any challenge or get in trouble, they won’t feel scared to come to us directly for help.” The increased family cohesion and introduction of new communication skills proved beneficial to multiple families and resulted in the reduction of interpersonal conflict about technology use and beyond. The program also improved participants’ confidence, courage, and other psychological factors. “Personally, I have seen myself improve in terms of my confidence in school. I now stand up and give answers to questions,” said Aisha Abdullahi. “In the past, even if I knew the answers, I just kept quiet and let others answer.”

For Aisha, like so many women and girls, the key barriers to joining the digital world and embracing its opportunities were interpersonal and psychological, as opposed to the technical or educational barriers on which development programming is so often focused. No number of mobile phones—free or otherwise—can empower someone socially or psychologically barred from using such a device. Recognizing this, USAID’s Digital Strategy—an Agency-wide vision for development and humanitarian assistance in the digital landscape—expresses a commitment to achieving and sustaining open, secure, and inclusive digital ecosystems, stating that “digital ecosystems are strongest when all players are free to exercise choice and agency in a balanced way.”

To create this enabling environment for inclusive digital ecosystems to develop and thrive, significant attention and resources need to be devoted to positively influencing social and cultural norms such that women feel free and empowered to access technology if they so choose. As EAI discovered with #Tech4Families, crucial to this task are partnership with religious leaders and community role models (who often actively or passively enforce social norms) and the education and engagement of the whole family unit. Before any other digital development aims can be achieved, development efforts must address the necessary and nuanced process of deconstructing social norms and challenging practices that routinely disempower women.

“As a result of being a part of the Tech4Families project, I have benefitted immensely,” shared father Abdullah Muhammad at the culmination of EAI’s programming. “I always directed my daughters, Aisha and Fati, to the neighborhood whenever they returned from school with an assignment. But, finally, I now have in me the courage to give them my mobile device to conduct their research.”

WCC is implemented by DAI’s Digital Frontiers project, a buy-in mechanism that works closely with USAID Missions and Bureaus, the private sector, and international and local development organizations to identify successful and sustainable digital development approaches and scale their impact globally.