This is a guest post by Rob Ryan-Silva, Director, DAI Maker Lab

We started the Maker Lab about a year ago to introduce a promising set of tools and approaches emerging from the maker movement to the developing world. These rapidly evolving and improving tools empower non-specialists to design electronic and mechanical devices, and to build them in quantities that are not economically viable under the traditional mass production model, upending some of the long-standing constraints around traditional manufacturing that have hindered developing countries’ access to transformative technologies.

Since then, we have applied this model in exciting ways. We have developed low-cost, open source flood early warning devices for municipalities in Honduras. We are promoting makerspaces as tools for inclusive economic growth in Jordan. We have designed programming to bring these new approaches—and a radically new way of learning them—to young people in El Salvador. But until this month, we had not applied the maker approach to governance and civil society programming, which is why I was so excited to run a three-day workshop—“Building Hardware for Civil Society”—at our Cambodia Development Innovations project in Phnom Penh.

At first blush, civil society may not seem an obvious home for bespoke technology, but in fact, it was some of the exciting things that civil society organizations (CSOs) around the world were doing with maker tools and approaches that first convinced us that this was an area we should be working in:

A Japanese CSO called Safecast grew out of an effort in the Tokyo Hackerspace to build an open source Geiger counter with integrated GPS capability. Citizens can collect detailed data about radiation simply by attaching this device, called the bGeigie nano, to a car, bicycle, or backpack, and going about one’s daily business, resulting in extremely detailed maps of radiation levels. Rather than try to convince a manufacturer that such a highly specific device had a viable market—and wait for tooling and other time-intensive elements of the traditional manufacturing process to bring it to fruition—Safecast was able to use modularized electronics marketed to the maker community for their design, which they teach nonspecialists to build in workshops all over the country. The bGeigie nano literally puts into the hands of citizens the ability to collect data critical to their ability to make decisions and advocate for their interests with government and industry—data that was previously the sole domain of governments.

New York City has laws requiring landlords to maintain adequate winter heating for tenants, but accumulating evidence for a successful complaint can be difficult. A tenants’ rights organization called Heat Seek NYC builds temperature sensors that log data to a cloud-based server to back up those complaints. As with the bGeigie nano, it is unlikely that a commercial manufacturer would find this a compelling market, but with access to low-cost microcontrollers, sensors, and modular communication hardware, Heat Seek can build the devices at low cost despite the small deployment.

While I was in Cambodia, a demining organization called Golden West Humanitarian Foundation graciously toured me through its design lab. Here they develop and 3D-print models of commonly found mines, bombs, and fuses for training staff of the many organizations around the world working to make their communities safe from unexploded ordnance. 3D printing enables Golden West to make complex interactive models of explosive devices, sometimes at several times actual size. They sell these to organizations at nominal cost, and digital fabrication enables them to recover their development cost despite the limited market and small production run¬—to date, about 40 sets have been sold. 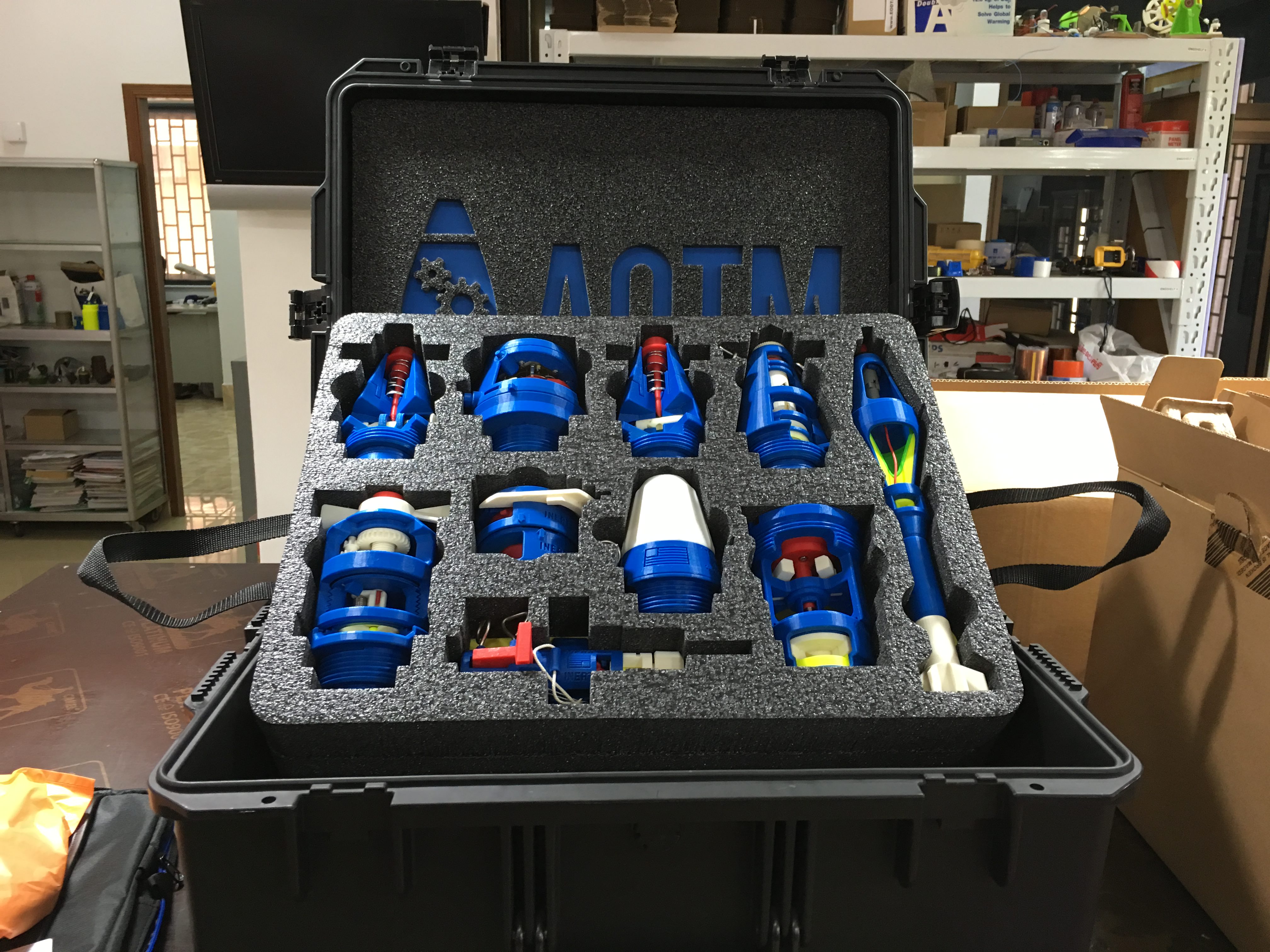 Twelve participants from eight CSOs working in Cambodia attended the workshop, learning to use the popular Arduino microcontroller platform to collect data from a variety of sensors, to output that data in a variety of ways for local users, and to send the data to the web or by text message using the Adafruit FONA GSM mobile phone module. While none of the participants had engineering or software development backgrounds, all ended the third day with working airborne particulate matter sensors that recorded their readings to the cloud.

Several participants told me that they found the hands-on, maker approach to learning deeply refreshing. Their enthusiasm showed. At the end of the second day, I showed a mockup of how such an air quality monitor might be deployed in a real life situation by arranging the components in a cardboard box, with a fan bringing in airflow from the outside. The next day, several of the participants came to the workshop with their own box-based designs. That they had gone home, found a cardboard box, and thought through the process of optimizing their own deployable design showed that they were engaging with the material and seeing it as something that they, as nonexperts, could work with. 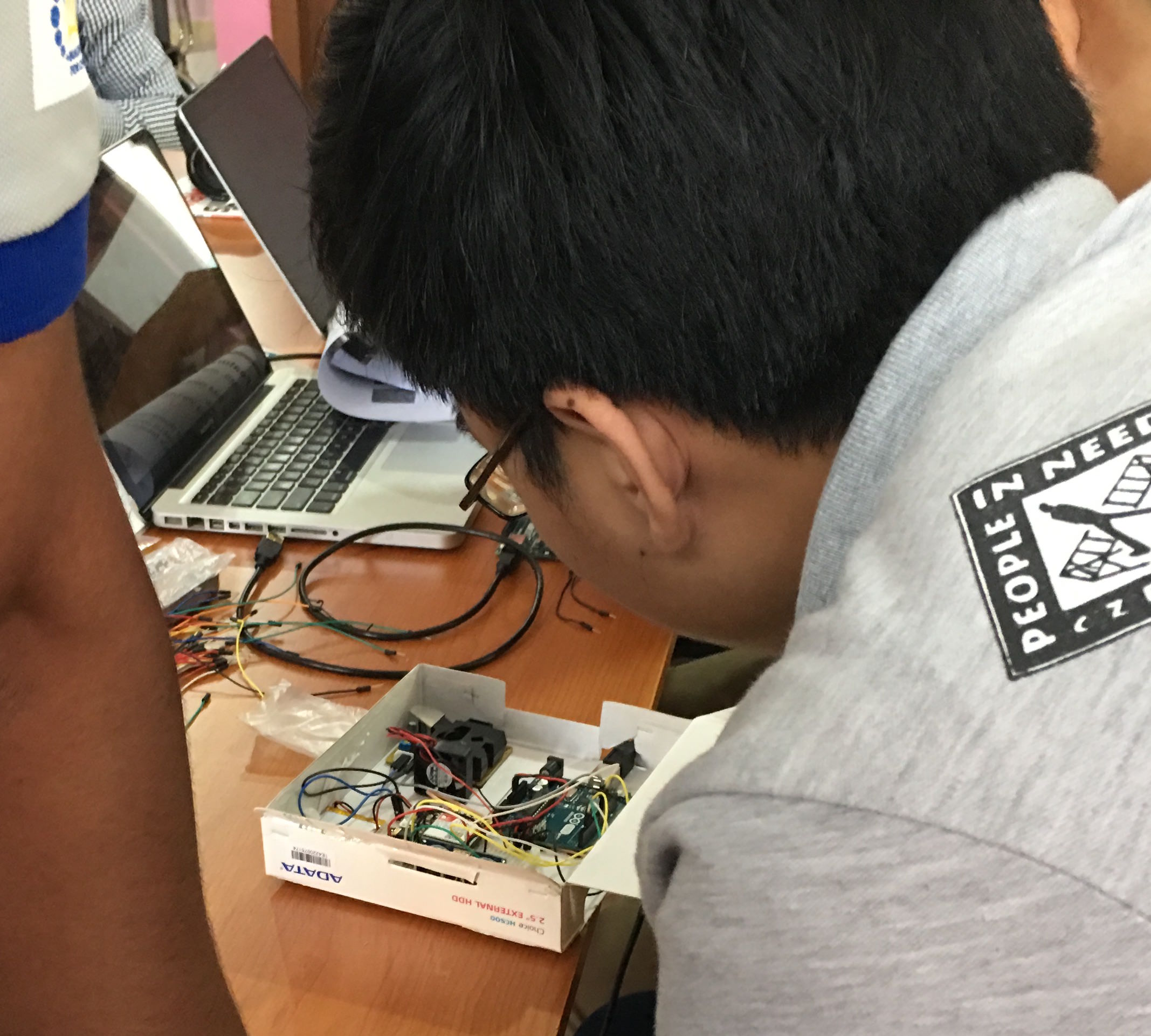 What will Cambodian CSOs build with these techniques? Ideas discussed included live monitoring of city congestion through GPS trackers mounted on tuk-tuks. With the addition of inexpensive accelerometers to register bumps, road quality could also be mapped this way. Similar devices could be used to track garbage trucks to verify whether contracted routes were being promptly served. One CSO plans to integrate custom flood sensors with their existing telephone warning system. Given Cambodia’s challenges with illegal logging, citizen journalist groups were interested in mounting accelerometers to trees in vulnerable forests to send alerts by text in real time when the tree is felled. All of these ideas, and many more, can be implemented with the techniques learned in the workshop.

We are eager to see what they make! Have you seen interesting examples of maker lab approaches in democracy and governance programming? Have questions about our other Maker Lab work? Ask us below in the comments, engage with us at @DAIGlobal on Twitter or email us: [email protected]