When DAI staff and partners ask us for examples of how our projects have successfully used digital tools, we inevitably describe the U.S. Agency for International Development-funded Uzbekistan Agricultural Value Chains (AVC) activity as one of the best examples. AVC strengthens agricultural value chains by engaging horticultural producers, processors, input suppliers, and exporters. With that goal in mind, it did not take long for the project to realize they could engage people through digital tools already widely used throughout the country to reach their target audience. They were right. A key part of this approach was understanding their audience and their social media habits—in short, knowing their users. As the project now looks to build on its success in using social media as a tool for development, it is creating a sustainability model based on insights from its target audience: horticulturalists in Uzbekistan.

AVC uses Facebook, Telegram, and YouTube to reach its audience. AVC works with a local horticulturalist who manages a longstanding horticulture Facebook group, and monitors the group for questions and then creates and shares YouTube video responses and other technical content. The group has grown to 53,000 members and receives 7,000 to 10,000 comments monthly. AVC also created Telegram broadcast channels and groups, allowing AVC to share original content with approximately 35,000 subscribers. The two-way groups have more than 3,000 production partners and provide a platform to talk to and learn from each other. AVC sends technical information to these groups as well but focuses more on monitoring and learning from the discussions. Finally, across groups and channels, AVC has created and uploaded more than 200 Do-it-yourself YouTube training videos on horticulture production for users to forward and download for offline sharing. In three years, the number of subscribers reached 30,600, and collectively the videos have more than 3.2 million views to date. In addition to pushing out content, AVC also uses the platforms’ metrics to learn more about which horticulture topics are trending and to produce content around those topics.

AVC’s digital engagement approach aligns perfectly with so many of the Principles for Digital Development. First, as mentioned above, the team knows its users’ technology habits and chose platforms that were already popular. AVC reused and improved an existing Facebook group. It designed for scale, reaching horticulturalists in all parts of the country. AVC understood the existing ecosystem in Uzbekistan, including the rapidly increasing mobile internet rates. Finally, the team is using data pulled from these digital tools to make informed decisions about which content to produce and push back out.

As the project comes to a close, the team rightfully wanted to think through another principle—building for sustainability. AVC is looking for a partner to build on the momentum that the project created over the past five years to produce even more high-quality content for the growing group of subscribers across all three platforms. Prior to making this selection, AVC wants to better understand the audience to determine the demand for content, design considerations, and most importantly, why they are accessing information through these digital channels. To do so, we built a survey, sent it out through the one-way Telegram channel, and were excited to receive 221 responses. The findings are included below and will be used to find the best sustainability plan going forward. 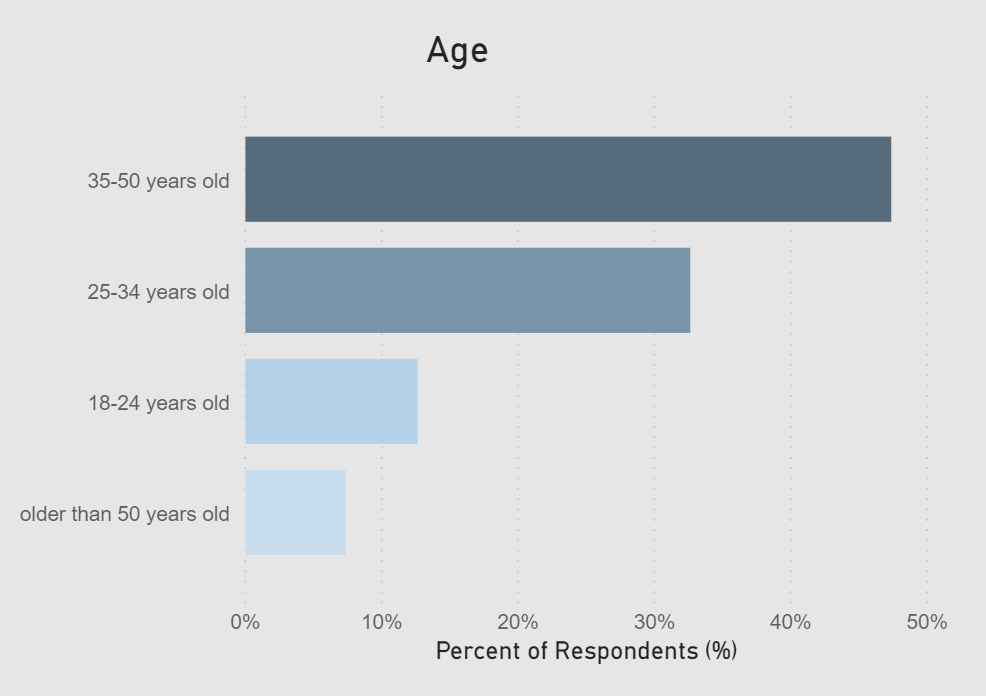 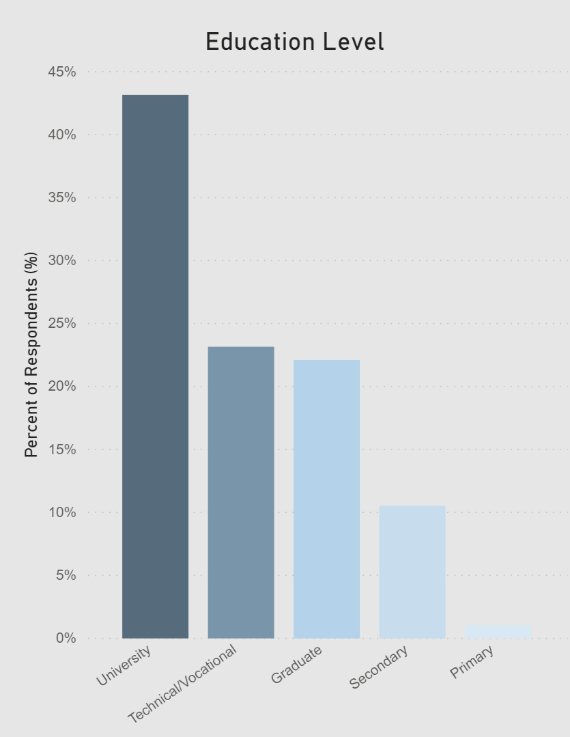 As demonstrated in the charts above, the majority of respondents have a high school education or above, with 41 percent graduating from university. It was also interesting to see that 45 percent is between the ages of 35-50, countering perceptions that digital tools are mostly used to reach younger people. Unfortunately, 95.5 percent of respondents were male, although 10.5 percent of YouTube viewers in 2019, and 14.6 percent of the Facebook group followers are women. A deeper dive into this issue would help us better understand why our digital tools are mostly reaching men, or if other reasons exist for this gap in our results.

We then wanted to learn about how the respondents are involved in horticulture, specifically whether they are farmers. As you can see below, 45 percent of respondents are farmers, while the remainder work in other parts of the value chain. We also learned that 52 percent of the respondents do not actually own land, and of the remaining 48 percent, 58 percent own less than one hectare and 27 percent own one to 10 hectares. This tells us that the majority of respondents who own land are smallholder farmers. We also asked about the type of information that is important to their horticulture practices. It is important to note that 140 of the 221 respondents selected pest and disease control as one of their answers. The last question in this section informed us that our respondents are growing multiple crops at the same time and that the top four crops they are growing are apples, grapes, cherries, and apricots. This is no surprise as Uzbekistan is among the top three countries producing apricots, the fifth largest producer of cherries, the 11th largest producer of apples, and among the top 15 countries producing grapes. If the data on this section teaches us anything, it’s that a Youtube video on pest prevention for apples will certainly get a lot of views—at least in Uzbekistan!

The insights on horticultural practices are so important because quality and timely content is the backbone of the project’s social media approach. AVC’s technical team is made up of horticulture specialists dedicated to making sure that the content is relevant, up-to-date, and valuable to the target audience. For example, this month the channels have had a lot of questions about bud grafting. because it usually takes place at the end of the summer. In response, the technical experts produced several videos on the topic including “What is bud grafting and how we do it?” Without high-quality content that covers the topics that horticulturalists care about most, the popularity of the social media channels would diminish. 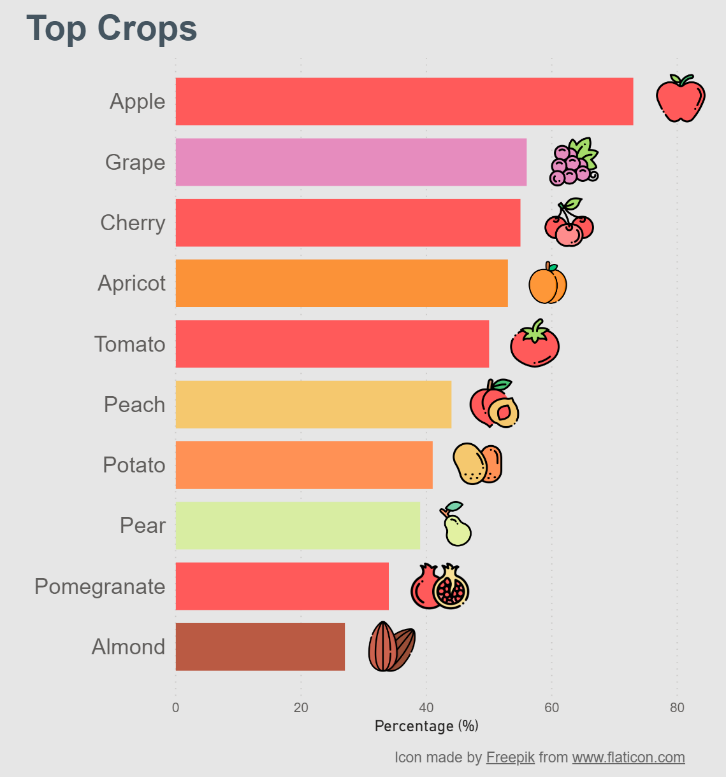 Next, we dug into the existing digital channels, examining which one is used the most and why people access information from them. As you can see below, the most popular reason for why respondents used these channels was because they allow them to engage with other horticulturalists. This tells us that they are getting information from each other as much as from our project and that future efforts should ramp up this engagement. We also learned that when asked, “Which of the following three digital platforms do you use most to get information about horticulture practices?” Telegram was a clear favorite.

More than 50 percent of respondents check Youtube and Facebook daily and 86 percent check Telegram daily. This means that if there is urgent information to push out, Telegram will reach the most amount of people the fastest. The insight on the *why *behind each platform can inform future content as well. For example, Facebook should be used more as a tool as two-way engagement given that 34 percent of people use it to ask questions in real time. Or, future content on YouTube should continue to include local horticulture experts since 23 percent view it as a way to gain access to those experts. In short, each platform offers something different and complementary. Users tend to check Telegram daily, and it provides them with up-to-date information, Facebook allows for a dialogue with the project, and Youtube provides more in-depth information and training. 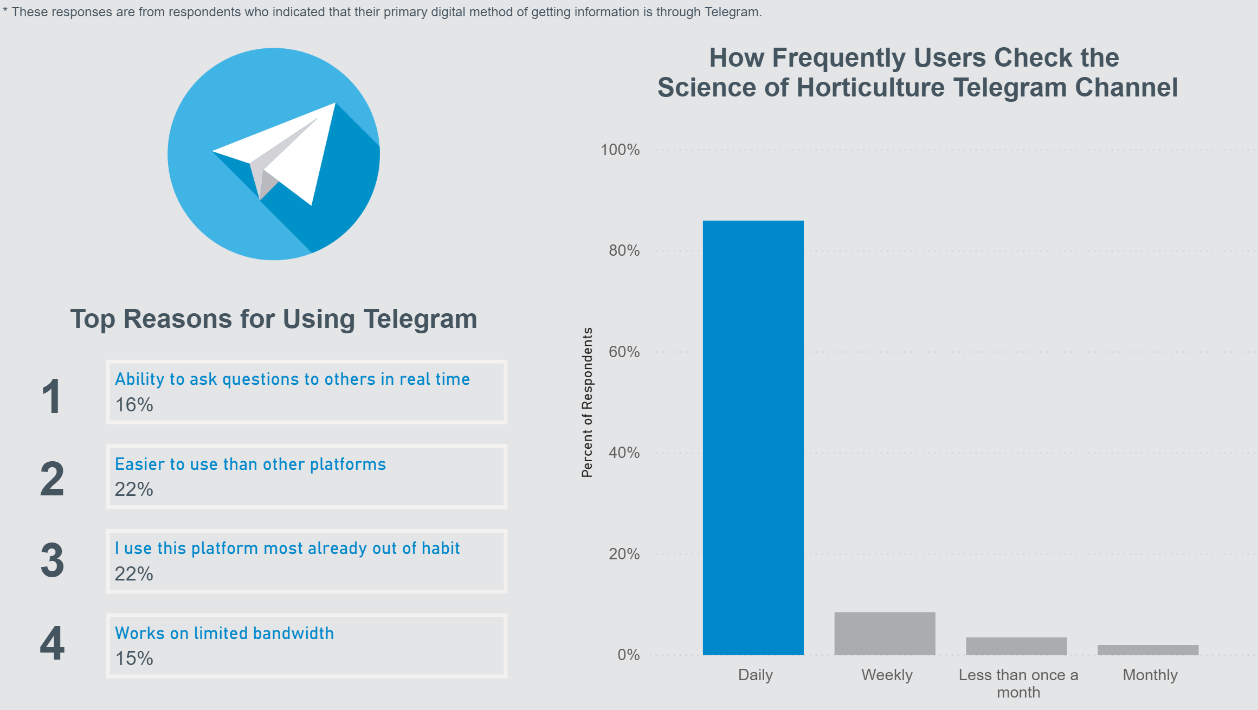 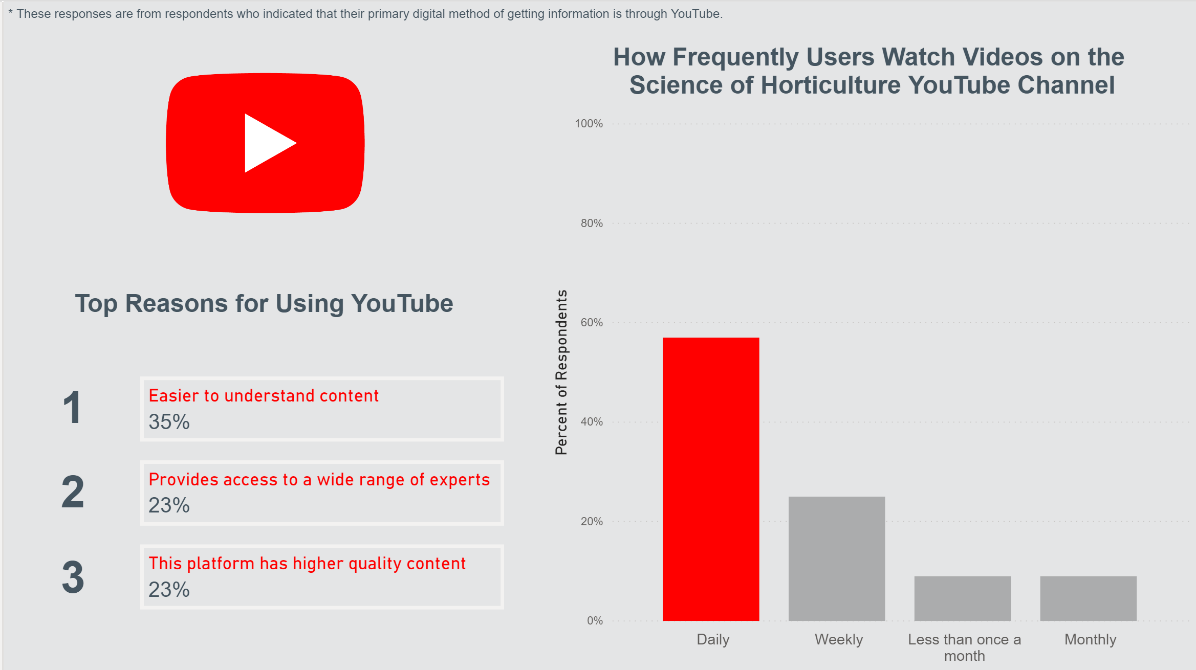 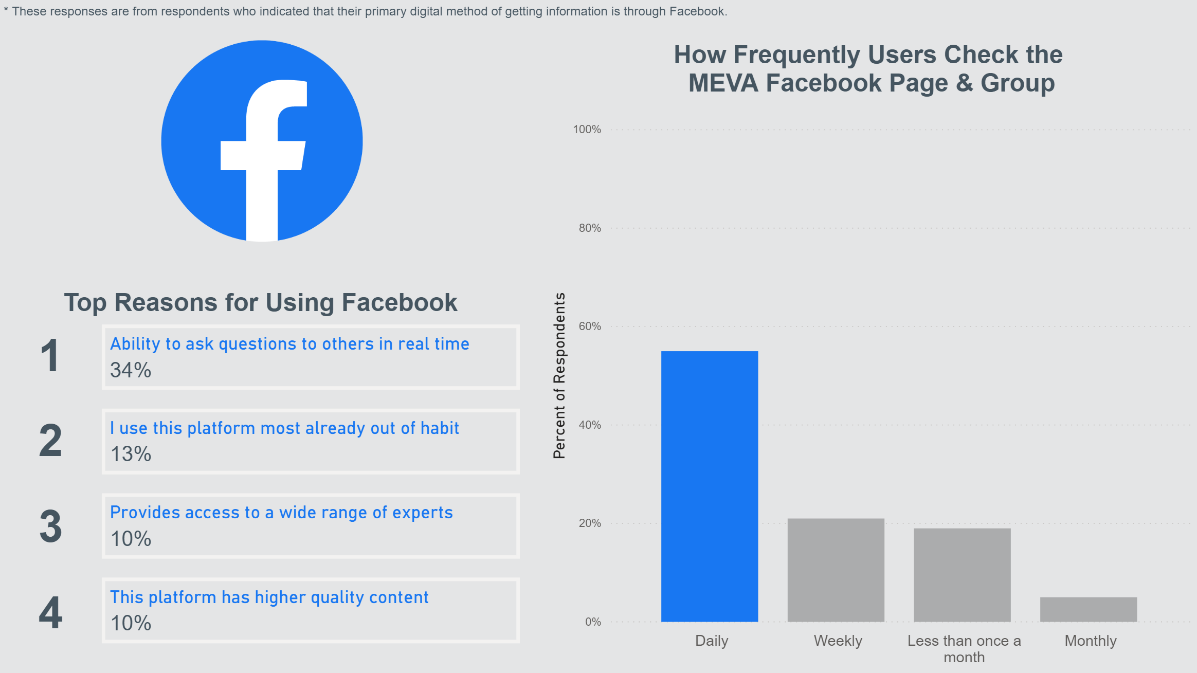 Overall, AVC has created an incredible online network that can be leveraged and grown with the right partner and right approach. By continuing to understand the audience even as it adapts, this approach to using social media as a tool for development can adapt along with it. As the project maps out the sustainability plan going forward, the data above provide important insights for that approach.