Over the past few months, I have been reading article after article about how to run a successful virtual workshop, training, event, and so on, all of which provided useful advice. But, as I have run my fair share of virtual meetings these days, and because I am often described as “direct” by my peers and colleagues, I thought I would take a stab at making my own list of to-the-point recommendations.

Before I start, I want to stress one fact that I’m sure we can all agree on: No combination of meeting software, virtual activities, co-creation websites, etc., can replace human interaction. Working together, in person, creates intangible benefits that simply cannot be replicated online. Once we accept that, all we can do is try our best with the tools that we have. So here goes:

When you think you’re done prepping, prep some more: I’m sure you have heard this one before, but it’s too important to leave out. When I was organizing a three-day virtual workshop, I went through all the capabilities of Teams, Zoom, and Webex, looking at the pros and cons of each and testing what they could do. Luckily, I had the help of a digital collaboration reference guide developed by my colleague in the Center for Digital Acceleration. In the end, I chose Webex Training because I wanted to see more than four people on video at the same time (Teams did not allow for that prior to the recent update), was concerned with the privacy issues in Zoom, and wanted to have breakout sessions within the workshop. Once chosen, I roped in someone from our IT team to give me a one-on-one training on the software and its capabilities and then proceeded to test it not one, not two, but three times with my internal DAI test dummies (they are not actually dumb). Only then did I feel prepared and confident to host a workshop. 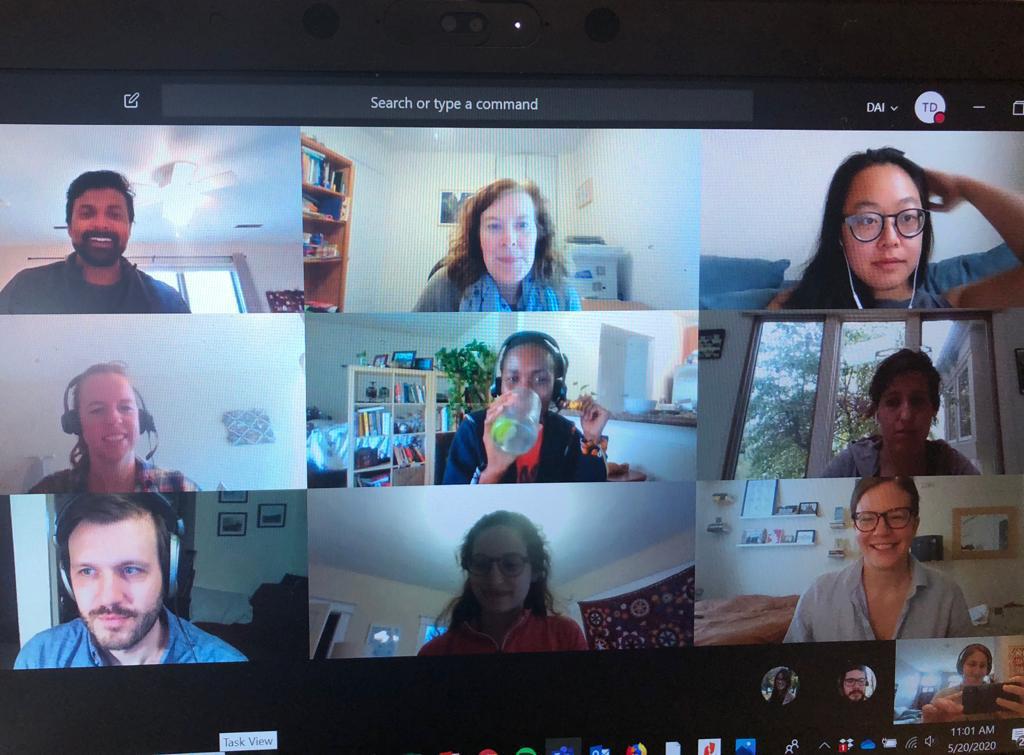 Bring out your inner bully: Over the past few months I have facilitated several virtual meetings and workshops and realized that my previous life as a high school soccer coach has worked to my advantage. I want to be clear that I am not telling you go out and yell at your participants in the same way that I used to yell at 16-year-old girls to shoot low and to the corners, but sooner or later, you’ll need to assert control over a meeting. Social cues barely exist in a virtual setting. Someone who is talking too long won’t recognize annoyed faces, and introverts are often even more reluctant to pipe up online. Sometimes, it’s OK to be a bit of a bully. It’s OK to call people out if they are not contributing and to cut people off if they are contributing too much. And, when possible, I strongly (borderline aggressively) suggest that people use their video. Being on video automatically forces people to pay better attention and stay engaged.

Side conversations (through text) are welcome: As a facilitator in an in-person meeting—or as a participant for that matter—texting and messaging on the side is highly frowned upon, and frankly rude, but in virtual meetings, I have found it to be critical. When participants are able to message the facilitator directly it enables the facilitator to adapt based on the needs of the participants in real time. For example, steering the conversation toward a question or comment they may have without being the one to interrupt. It allows the facilitator to understand what topics may be important to explore more deeply and what topics to skip altogether without forcing participants to say so out loud. In short, WhatsApp, iMessage, Teams messaging, and so on, are your friends.

Sometimes less is more: One event I organized was supposed to be a co-creation workshop. The pre-COVID-19 plan was to gather all the co-creation necessities—flipchart, post-its, whiteboards, markers of every color—and facilitate a traditional brainstorming session. So, when it came time to translate that to a virtual setting I went deep into all the internet had to offer. I tested virtual whiteboards like Mural and Miro, Google slides, and the whiteboards offered by Teams and Webex. What I learned: Sometimes less is more. The learning curve for using these tools was too steep, and the desired effect of constant collaboration would have been lost in a haze of “How do I change the color?” or “How do I make a text box?” questions. This is not to say that these tools can never be helpful, but I quickly realized that for our purposes, we needed to keep it simple. So instead, we used the chat function. We created a PowerPoint, shared the screen and had people type in their content and design-related comments as we went along. At the end of the workshop, we copied and pasted the chat into our notes and were easily able to make the desired changes based on all participants’ feedback.

Murphy’s Law: Remember when I told you that, for one workshop, I tested Webex Trainings three times to be fully prepared? Well, there were still unforeseen issues that had to be mitigated in the moment. I didn’t realize that once in the breakout discussions—the time when participants are in small groups and really hoping to replicate in-person interactions—the video does not work! This is just one example, but the reality is that you cannot predict what will happen when you’re in a virtual meeting for four hours at a time.

Anything that can go wrong, will go wrong. The key is to always have a backup plan. These problems can be technology-related (internet cuts out, lack of video capability, shared screen freezes), but they can also be people-related. Using a new software can be complicated, especially when you are asking people to join breakout groups, share their screens, participate in the chat and mute and unmute their lines. In the same workshop, the audio cut out for half the participants after a bathroom break. We had no idea why it had happened (tech or human error), but instead of waiting for IT or trying to fix it ourselves, we quickly sent around the Teams meeting link made as a backup prior to the meeting and jumped right back into the discussion with no less than a five-minute delay.

Hopefully this advice is helpful as you look to organize and facilitate your own virtual event. The key is to prepare, hope for the best, and plan for the worst. Good Luck!

This is the first in a series on digital collaboration, stay tuned as we share our experiences and lessons learned on virtual workshops and presentations, e-learning products, user engagement and more!