In October 2015, I was in El Salvador to help DAI launch the new U.S. Agency for International Development (USAID) Employment Training Project, which works to link at-risk Salvadoran youth to educational and employment opportunities, foster social inclusion, and reduce the space for gangs to influence and recruit young people. While I was there, I made a point to get a sense of the role mobile phones play in young peoples’ lives: do most youth have mobile phones? If so, are they smartphones or basic phones? Which apps do they use? This is the first of two blog posts I’m writing about my time in El Salvador. Find the second post here: Innovation and Entrepreneurship in El Salvador. This post is also part of a larger set of Digital Insights that DAI’s ICT team collects from various developing countries. You can find them here.

For a USAID project, understanding how local people interact with information flows is key to reaching beneficiaries in ways that are familiar to them, increasing the likelihood that content will create impact. In the case of the Employment Training Project, high mobile—particularly smartphone—adoption would open the door to a number of possibilities: connecting young Salvadorans to labor markets and job opportunities or even helping them design and promote their own apps as viable businesses. To get a better sense of how at-risk youth in El Salvador communicate, DAI hosted a small focus group with nine young people, averaging 21 years in age. Below are the results. But first, a brief discussion of mobile adoption in El Salvador:

Salvadorans have been leading adopters of mobile technologies. According to BuddeComm, the country’s mobile penetration rate in 2015 reached 146 percent, which means that there are 1.46 mobile connections for each person in El Salvador; a current population of 6.108 million means there are roughly 8.9 million mobiles connections in the country. The 1.46 figure suggests a rapid growth rate—18 percent—since 2013, when GSMA reported the same figure at 1.24 (or 124 percent) in their Latin American Mobile Economy report (see chart below). 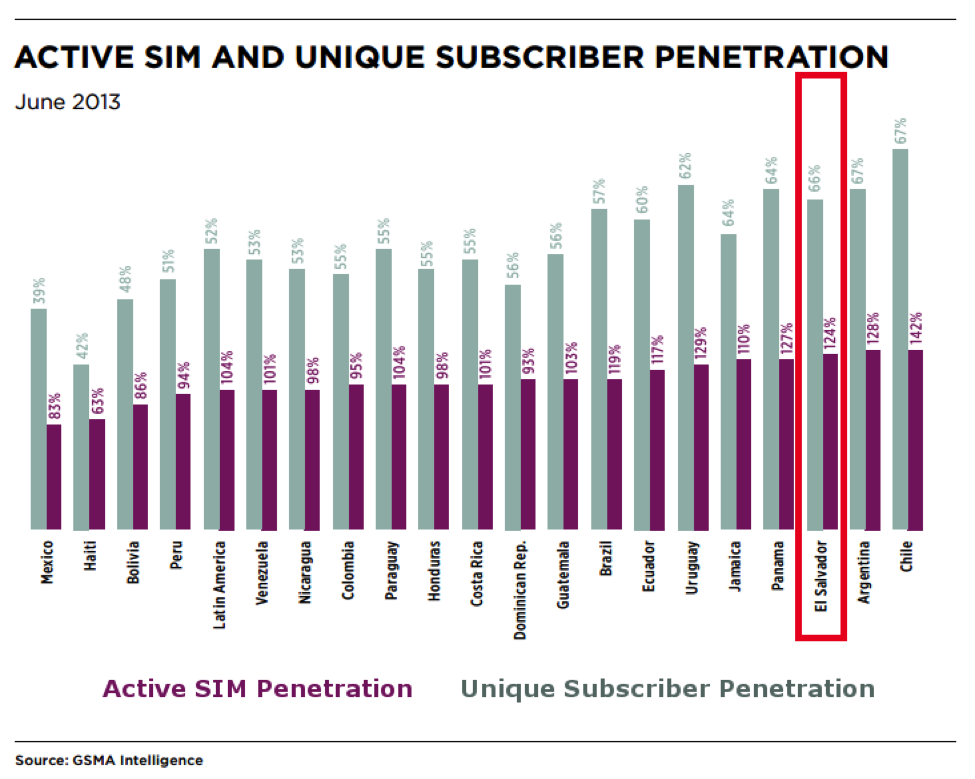 The chart shows active SIM penetration at 124 percent in El Salvador, while the overall proportion of the population that had at least one SIM (unique subscriber penetration) was 66 percent. The chart also gives a sense of where El Salvador stood in terms of mobile adoption relative to other Latin American countries back in 2013, but given the rapid evolution of the mobile market, I would anticipate that data from two years ago would have little bearing on today’s reality.

A sample size of nine is clearly not representative of all young Salvadorans. We chose to do a quick and dirty analysis to get directional information on the communities the project will be operating in; with that caveat in mind, key highlights from the research include: