I can’t remember exactly what I was doing when the grenade went off up the street—probably brushing my teeth or something mundane like that. I was halfway through my two-week visit to Ethiopia and looking forward to getting out in the field. I was also completely unaware of what had just happened. It was a sobering day. I spent all afternoon watching the news. First one person confirmed dead, then two. One-hundred and fifty or so wounded. Fear on the faces of a populace that had recently been so full of hope. 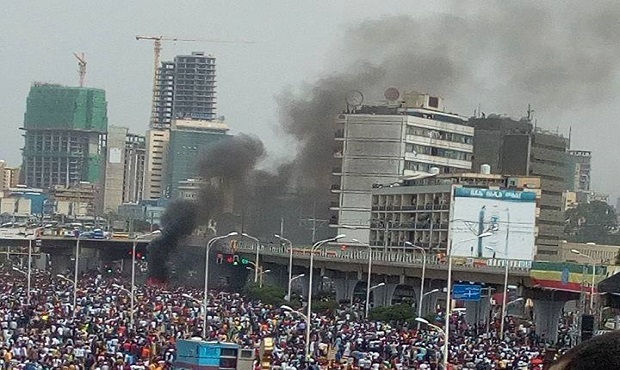 Ethiopia is undergoing major changes. The former prime minster unexpectedly resigned in February, prompting a state of emergency in a country already experiencing years of unrest. In April, a new prime minster rose to the top, one representing the marginalized Oromia majority: Abiy Ahmed. Young, vibrant, and spreading a unifying and hopeful message, Prime Minister Ahmed has already made several impactful, peace-promoting decisions, including the release of political prisoners and pushing forward a long-languishing peace agreement with Eritrea. In the week prior, multiple strangers had expressed to me their excitement about the changes afoot. “He’s bringing peace to our country. We are now safe and free to express our political beliefs,” said the gentleman escorting me to my meeting with Ministry staff. The joy was palpable.

A number of changes have happened in the technology sector as well, such as the lifting of bans on websites and the opening of state-owned companies to private investment, such as telecom provider Ethiotelecom. These are the developments about which digital health professionals like myself get giddy. The relaxing of restrictions and loosening of monopolies can open the door for innovation that can change lives.

But before moving forward with ideas, it’s important to ask: What is our responsibility as health professionals when it comes to digital information? We have to be cautious in our approach. The peppering of a country with apps, tablets, and other tools designed to overcome social and structural barriers to health and well-being without coordination across stakeholders and alignment with the priorities and plans of a host government can lead to parallel, competing systems. These systems have the potential to destabilize and fracture existing systems. And tools are not always designed with the user in mind. We can do more harm than good.

So how do we move forward? The smart folks contributing to the Digital Principles Forum have developed nine guidelines those of us in the digital development space would do well to follow. Building for sustainability—with a focus on embedding your innovation in policies—and being collaborative, even with competitors (I know, I know), is paramount. My colleagues at DAI recently expounded on lessons learned in the adoption of digital tools that is worth a read.

The world is changing. For Ethiopia, this change has the face of a young, charismatic leader. Despite the recent violence, the mood in country remains optimistic. As digital health professionals, let’s do what we can to buoy that optimism. Responsibly.