This is a guest post by Ting Shih, CEO and Founder of ClickMedix

More than 800,000 refugees came to the Island of Lesvos, Greece, to seek safety and a new life. Many of them came from Syria, Afghanistan, Iraq, and other conflict-ridden countries. As the refugee crisis in Greece subsided, there are about 3,000 refugees who now remain there, anxious to find ways to integrate and contribute to Greek society. The refugees I met are educated and skilled and some used to run their own businesses. They’re not helpless, but they are constrained and in a state of limbo as they await asylum. This state of uncertainty and despair is especially challenging for refugees who were, until recently, productive members of the workforce. Our role is to help them understand their new pathway, by leveraging what they already know to do as well as provide new skills.

One of them is Jalal. He is just 22 and full of energy and aspirations. Jalal is building his own social enterprise to help fellow refugees and working as a translator at a local law firm. He even taught himself English during his stay in Greece by interacting with international volunteers and other aid workers. Is Jalal unique? Are there more budding entrepreneurs like him? Can we help them achieve their dreams?

On May 9, Europe Day, I worked with Changemakers Lab, a Lesvos-based coworking hub, to launch its first co-lab initiative where refugees, students from the University of Aegean, mentors from social businesses, leaders from nongovernmental organizations, and heads of local government worked together to chart the path of creating social enterprises with the refugees so they can use their skills and ideas to thrive within the Greek community.

Teams of refugees and students were formed and participated in a Lean Startup week using design-thinking processes. They were introduced to tools such as the business model canvas and business pitch templates to co-create solutions that would benefit the refugee communities using their combined skills and expertise. The teams came up with ideas such as mobile-phone repair service to be run by one of the refugees who used to fix phones in his country. One other idea was to set up a Syrian-themed restaurant and catering business to attract Greeks and tourists interested in a new cuisine while satisfying refugees’ cravings for home-cooked food. The refugee who came up with the idea used to run a catering business with his wife back home. Another idea was using technology to screen for health risks and obtain medical advice for refugees working with the ClickMedix platform, and local Greek medical specialists. At the end of the workshop, the teams pitched their ideas to mentors and leaders from local nongovernmental groups and potential funders. For most of the team members, it was the first time they had developed a social business pitch and implementation plan. 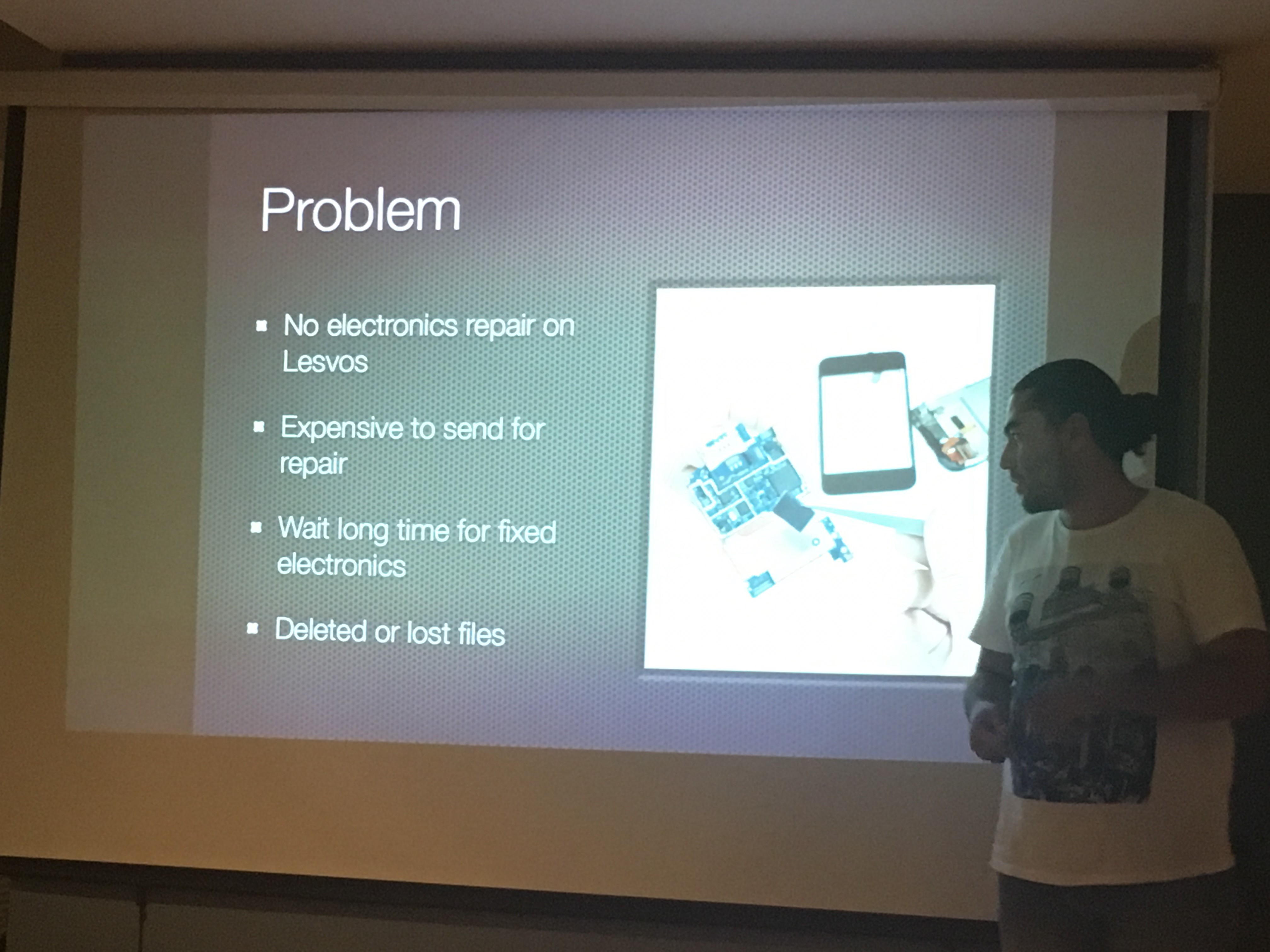 Having facilitated many business innovation workshops, most of them without the participation of those affected by the problems of refugees, the co-lab experience incorporating the refugees, to solve refugee-related issues, was quite a demonstration of the importance of co-creating with the users of the envisioned solutions. From a design-thinking process perspective, involving those representing the target beneficiaries shortcuts the duration of problem-identifying phase and speeds up the solution-identification process significantly—what has been tried, what would work, what would not work with the target population. Another critical benefit of involving direct beneficiaries early on is to more easily and quickly identify pilot sites and the stakeholders involved. For example, to pilot the use of ClickMedix for health risk screening, we identified a local Greek medical specialist who has already been working with the refugee patients and was able to work with the camp volunteers to start setting up a pilot. Lastly and most importantly, those who co-created the idea would take ownership of the idea to take the idea from concept to a thriving business.

Despite being the first Lean Startup for refugees in Greece and having successfully incorporated the refugees and the Greek community participants, funding sources remain uncertain. As with many business pitches, many of the stakeholders were interested in seeing how the ideas will evolve into actual implementations, the pathway to funding for the refugees’ ideas is unclear. Changemakers Lab will be establishing co-working spaces to attract local refugees and entrepreneurs as well as international enterprises to the Island of Lesvos to co-create more high-impact solutions and continue to engage interested stakeholders and investors.

You can read more about the incubation labs for refugees in this interview with the Founder of Changemakers Labs!